Changes to your app with each update should be documented in the form of release notes. The Kustomer app development team expects you to be able to tell users what's new or changed in each update. This should be similar to what your team already provides when developing for other platforms like the Apple App Store.

Why should I care about release notes?

Customers often postpone installing app updates if they lack confidence around what's changing, and if they aren't sure whether the update will disrupt their live businesses. Lack of clarity in the update process can result in an organization putting off installing a crucial upgrade, resulting in issues and downtime.

Andy's team worked to issue a critical bug fix for their Acme app that prevents users from losing data. It might be embarrassing to admit the bug occurred, so Andy decides to downplay the severity of the issue in the release notes. He publishes an update to the Acme app with the release notes listed as: "General improvements and bug fixes."

Xavier, an admin at a company that uses the Acme integration in Kustomer, sees the app update and reads the release notes. He's worried about causing downtime for his team, and when he doesn't see anything specific in the release notes that would make him prioritize installing the update sooner, he decides to schedule the update during the weekend later in the month. A few days later, a user on Xavier's team encounters the data loss bug in the old app version, and a case has to be escalated to Andy's support team.

How could this have been avoided?

You can mitigate this by using release notes to provide a thorough, transparent, and easily-understandable changelog that tells users about new features and functionality, bugs that were fixed, and any other relevant changes.

Release notes are an important avenue for your team to build trust with users. All software has bugs — and while it may be tempting to gloss over specifics, it's important to directly speak to issues that occur in your app in order to build and maintain healthy user expectations. Release notes aren't a rap sheet: they're evidence of your team's commitment to your users through the new features you implement and bugs you fix over time. Your customers benefit when you take the time to be direct and transparent about changes to your apps.

Here is an example of a typical release note with room for improvement.

In the following example, this release note accurately describes a change to the app, but the framing is focused on a potentially internal name for a change with vague user value. The release note can be improved by refocusing the message in terms of how the user experience benefits from this change. 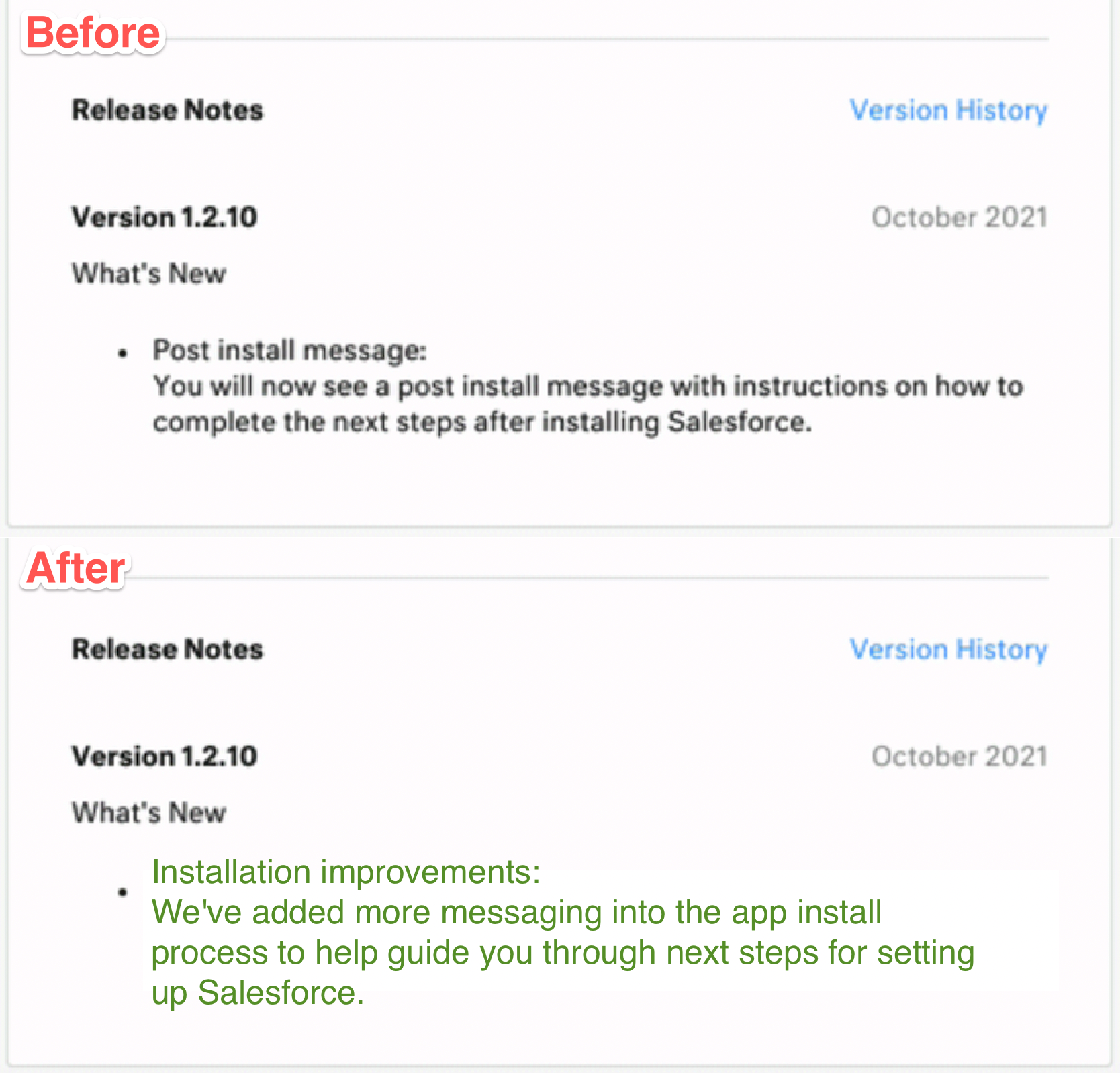 These updates are far too nonspecific to meet our content criteria. If an admin knows the changelog is a core part of their team's workflow, they might be wary to install the update because they don't know how it impacts their live team. In addition, the missed calls change is vague and doesn't make it clear whether this change no longer logs voicemails, or if it fixes an issue where missed calls weren't being logged.

The release notes would need to be rewritten to explain both of these changes in more concrete detail.